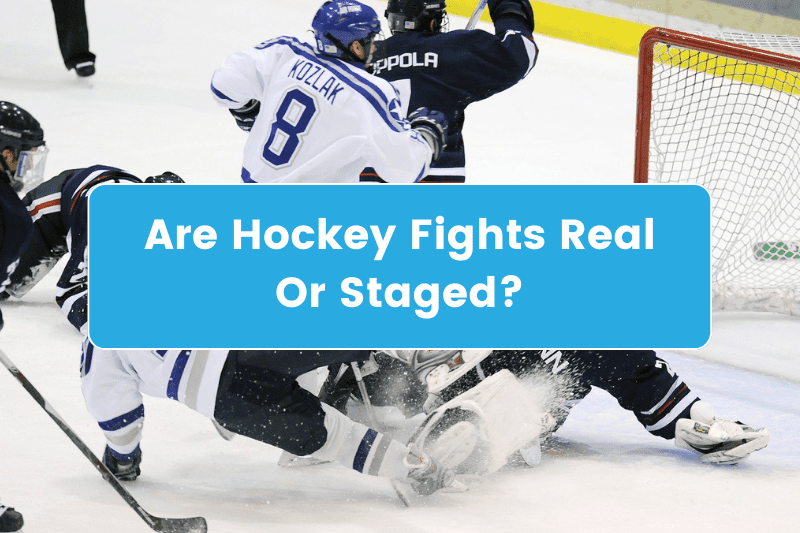 Ice hockey is known for its high-speed action and physical play, but one aspect of the game that often divides opinion is fighting. For some, fighting is a natural and exciting part of the game, while for others, it is unnecessary and even dangerous. So, the question arises: are hockey fights real, or are they just staged for entertainment?

The answer is yes, hockey fights are very much real. Fighting is a natural and accepted part of the game of ice hockey, and players do engage in physical altercations on the ice. These fights can occur spontaneously as a result of a hard hit or a dispute between players.

In this post, we will explore the history of fighting in ice hockey, the role of enforcers, and the arguments for and against fighting in the sport. We will also examine the league’s stance on fighting and any recent efforts to address it. By the end, you will have a better understanding of this controversial topic.

History of Fighting in Ice Hockey

Fighting has been a part of ice hockey since the sport’s early days in Canada in the 19th century. Fighting was relatively common and was seen as a way for players to settle disputes on the ice. However, as the sport grew, it became more organized and the rules were changed to try and reduce the number of fights.

In the early 20th century, the National Hockey League (NHL) introduced rules to penalize and suspend players who engaged in fighting. Despite these efforts, fighting remained a common part of the game.

In the 1960s and 1970s, the role of the enforcer emerged, where teams would recruit and train players specifically to fight on the ice. These players were often larger and stronger than the average player, and their primary job was to protect their teammates and intimidate the other team.

The Role of Enforcers in Hockey

An enforcer is a player who is responsible for protecting their team’s star players and standing up for their teammates against opponents who may be taking liberties out on the ice. Enforcers are known for their physical play and willingness to engage in fights with opposing players.

The role of the enforcer has changed over time. In the early days of ice hockey, fights were a common and accepted part of the game. In the 1960s and 1970s, enforcers became a more prominent part of the game, with many teams employing players specifically for their fighting ability.

In recent years, the role of the enforcer has become less important. The rules of the game have been changed to discourage fighting, and many teams now place a greater emphasis on speed and skill over physical play.

The Arguments for and Against Fighting in Ice Hockey

There are several arguments for and against fighting in ice hockey. Some of the arguments for allowing fights include the idea that it can help to deter other players from taking advantage of star players and that it can also serve as a form of retribution for dirty plays. You’ve also got the fact that some fans and players enjoy the intensity and physicality that fighting brings to the game.

There are several arguments against fighting in hockey too. One of the main reasons is that it can lead to serious injuries, both for the players involved in the fight and for players who may be hit by errant sticks or punches. You’ve also got the fact that it can lead to penalties and suspensions. Something that no one wants.

What is the Punishment for Fighting?

The penalties for fighting can vary depending on the league and severity. In the NHL, when two players are fighting, they can both be given a five-minute major penalty, where they both have to sit in the penalty box. The player’s team will then have to play shorthanded for the duration of the penalty.

If a player instigates a fight with an unwilling opponent, they may receive additional penalties, such as a two-minute instigator penalty and a ten-minute misconduct penalty. This is on top of any other penalties that the player may receive for fighting.

These additional penalties are intended to punish players who start fights with unwilling opponents and to discourage this type of behavior in ice hockey.

As you can see, the issue of fighting in hockey is a complex and contentious one. Some people believe that fighting has a place in the game, while others believe that it should be eliminated.

Whatever you think, there’s no denying that fighting in hockey is absolutely real and players can get very hurt!