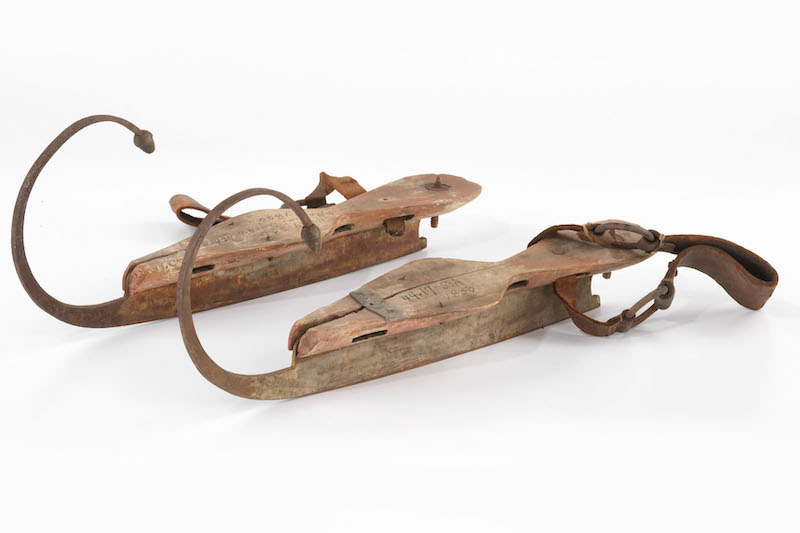 Over the course of centuries, ice skates have evolved from incredibly primitive transportation tools to the marvel of engineering that we have today. You’d be surprised as to just how far ice skates have come.

Read on to learn more about the history of the ice skates and how them came to be what we know them as today.

When asked, most people probably would estimate that ice skates were probably invented somewhere around a few hundred years ago, but the reality is that they are much older than that.

Some historians say that the earliest known form of ice skates were used in Scandinavia almost 4,000 years ago. Dating back to 1800 BCE, early Scandinavians would poke holes in bones the length of their feet. They’d then fashion some sort of strap to replace skate laces and tie these bones to their soles so they could utilize them for transportation across frozen lakes and even larger bodies of water.

Unlike our modern ice hockey skates, these bones were smooth and sometimes rounded. With the lack of a sharp edge, skaters would have to use poles to propel themselves while their bone blades glided along the ice surface.

With the ability to mine and mold metal into tools and weapons came the ability to construct ice skates with metal blades. In fact, these blades often resembled a crude type of runner and blade that we have on our ice hockey skates.

These ice skates consisted of a metal blade either wedged between two small wooden planks or fastened to one plank in some fashion. These wooden planks were then strapped to the shoes allowing for early ice skating.

Unlike the bone models used by their predecessors, metal blades ice skates dug into the ice eliminating the need for poles to stabilize and propel the wearer along the surface of frozen ponds. Due to the dull nature of some of these blades, they were clumsy and required much more effort than the blades we use today.

Long about the 15th century, blacksmiths began to shape these blades with a pronounced curve at the toe. This not only prevented the tip of the blade from becoming stuck in the ice causing the wearer to tumble forward, but this curve may have become a fashion statement as some had a much more dramatic toe curl than was functionally necessary.

As time wore on, the technology became available to produce more ice skates in a shorter period of time and make improvements that would lead to modern ice hockey skates.

Sometime during the 13th century, a period knows as the “Little Ice Age” began as worldwide temperatures dropped. This lasted well into the 19th century and caused many more people to take up ice skating in colder weather as casual recreation or use skates as a means to travel across frozen bodies of water.

The process to produce these skates was refined, and thanks to industrial advancement, you no longer needed to contact your local smithy to have a pair constructed. During the period leading up to the Industrial Revolution, the manufacturing process evolved to the point where ice skates became cheap and easy to manufacture. This meant that ice skating was no longer the hobby of the few, but the general populace would have access to a pair of skates for their own use.

The new mass-produced skates were also constructed differently than previous models. The blades were much longer and much thinner than the 13th century ice skate blades. This allowed for faster skating and better balance as the length of the blade provided more surface area to support the wearer’s weight and the thin blade reduced friction smoothing out a skater’s forward progress.

In 1772, Englishman Robert Jones published A Treatise on Ice Skating, a work that is thought to be the origin of figure skating. The concepts in this work would influence 20th figure skaters to refine the sport and lead to the invention of the toe pick in the 20th century.

The 20th Century: The Evolution of Modern Ice Skates

During the 20th century, we begin to see ice skate become more like the skate we use today. Up until this point in history, ice skates had been a peripheral or an accessory skaters would have to attach to their shoes. During the 1900s, the skate boot was invented so that the blade could be attached directly to the shoe, many times permanently. This boot and blade concept spelled the end of the strap-on blade and would lead to all sorts of innovation in the future.

Metallurgical science also became more refined, and blades became crafted from more durable materials that would allow skate makers to create a thin, long blade that would give skaters a much smoother glide on the ice. As we’ve mentioned earlier, it was also during this time that the toe pick was added to special blades for figure skaters and skate makers were now altering boots and blades to fit specific sports and purposes. There were even specifically made boots for different hockey positions like the difference between hockey goalie and player skates.

With the diversity of sports requiring ice skates, ice skate innovators began crafting skates to fit an individual purpose. The ability for engineers to evaluate the physics and the nature of each ice sport had led to a diverse selection of skates designed for use in specific situations giving athletes the tools they need to excel rather than adhere to the simple, one-size-fits-all skate of yesteryear.

Thanks to these innovations we now have ice hockey skates invented for ice hockey players. Our boots are stiffer and more protective than figure skates. Our blades are designed for mobility and for use both backwards and forwards. We’ve come a long way from strapping bones to our feet to having the proper footwear for the fasted game on ice.