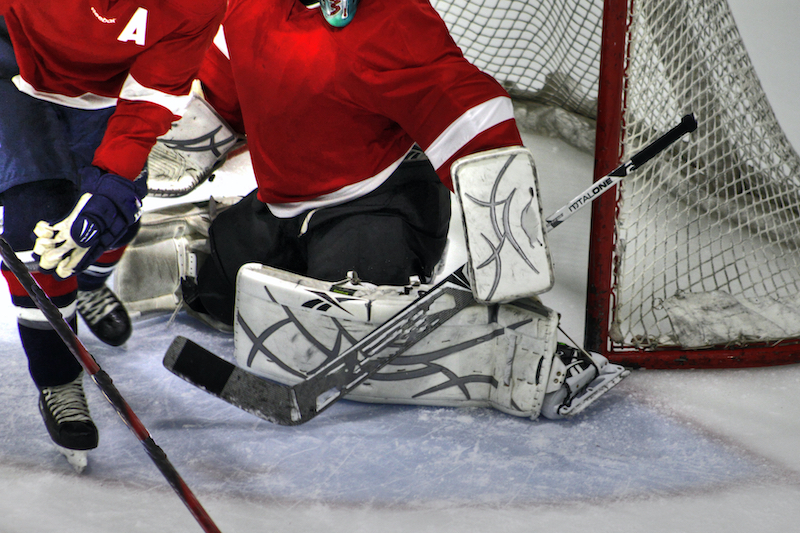 Every hockey player on the ice wears similar equipment, but there are some differences depending upon their role. While it’s pretty obvious that ice hockey goaltenders wear different protective gear than the regular players, you may not realize that they also have special needs when it comes to the type of hockey skate they wear. While the youngest goalies may get away with wearing standard ice hockey skates since they often play multiple positions at a young age, ice hockey players who have committed to specializing in the goaltender position will wear a skate that is quite different from the rest of the team.

Let’s take a look at some of the unique features of a hockey goalie skate and what the differences are between regular ones.

How the Goaltender Skate Blade is Designed

If you take a look at a standard ice hockey skate blade, you’ll notice that it is curved at either end, and some may have an even more distinct slant if they’ve been profiled to fit a unique skating style. This has been developed my manufacturers over the history of ice skates to fit the needs of a player out on the rink.

A goaltender doesn’t rely on acceleration, backwards and forward skating speed or the ability to maneuver in tight corners. Their primary momentum is side to side. A goaltender’s hockey skate blade is manufactured to promote this movement.

If you were to hold a goalie hockey skate and a player skate side by side, you’d notice one difference almost immediately. The goaltender’s skate blade is longer than a player’s blade. This is due to the side to side movement required as the goalie tries to cover both sides of the net. The long blade provides more surface area to push off with, giving them better explosion when moving from one side of the crease to the other.

On closer examination, you’ll also discover that not only are the goaltender’s blades longer, they is also little to no curve on either end. They are designed this way to use every single inch of the blade for maximum dig into the ice. If a skater’s blade was longer and flatter like a figure skate blade, they may dig too much into the ice and greatly reduce speed and maneuverability, but as we’ve already mentioned, a goaltender’s movements are most reliant on explosive power to slide a few feet at a time and then back again as quick as possible.

There’s one other aspect of design that gives ice hockey goalie skates more surface area to work with than standard skates. The blades themselves are thicker. This allows goaltenders use different sharpening techniques than those available to skaters. Goaltenders will use a narrow hollow, meaning that the blade in nearly flat. This also promotes side-to-side movement and stability, but does sacrifices speed, turning and stopping.

While it may seem ideal for goaltenders to use a completely flat blade, they will need to skate beyond their crease on occasion, so they still want an inside and outside edge on their skate. Some goaltenders will only sharpen the front half of their skates for this purpose and leave the back half flat in order to reduce friction in the crease but still allow for some dig when skating after pucks behind the net.

The skate boot of the goalie skate is also different from the design of a standard ice hockey skate boot.

An ice hockey goaltender faces a barrage of shots and wears a ton of padding and special equipment to protect him from being injured from a fast moving puck or errant stick on plays in the goaltender’s crease. The design of a goaltender’s skate also takes this into account.

Modern goaltender hockey skates have incorporated an element known as the cowling. This is a protective sleeve that covers the toe and the top of the foot to soften the blow from a hard shot. This cowling may or may not attach to the skate itself, but you’ll rarely see a goaltender’s skate without one.

Toes and the bones of the foot are easily broken and there is little protection against injury without this cowling in place. Some higher-end hockey goaltender skates are constructed with this cowling sewn into the skate lieu of an attachable sleeve.

The sides of goaltender skates also tend to be constructed of thicker, harder and less flexible materials than a regular ice hockey skate. This offers better protection against injury due to shots.

There are similar protective pieces like the cowling and plates that protect the sides and top of a skater’s foot, but they are an extra piece of equipment rather than an essential part of the skate.

Finally, a goaltender’s skate boot is often shorter at the ankle and has a shorter tongue than a standard skate boot. Goaltenders have to get down into what’s called a butterfly position and then get back up or shift directions from their knees. A less restrictive ankle portion of the boot gives them the freedom of movement and flexibility necessary to do this as quickly as possible.

The short answer to the question “are goalie skates necessary” is yes.

Unless you’re purchasing skates for a young, beginner youth hockey player who is interested in trying out the position, it’s highly recommended that you wear appropriate goaltender hockey skates when playing the position.

At the youngest ages, the pucks are lighter and not shot as hard as in older age groups, so youth hockey players can get away with wearing standard skates at the lower levels. In fact, very few coaches recommend that beginners specialize in the goaltender position.

However, if you’re an adult or older youth, wearing standard ice hockey skates increases the risk of injury and restricts the movements necessary to be an effective goaltender. If you play both goaltender and a skating position, it may be a good investment to carry both types of skates in your gear bag.