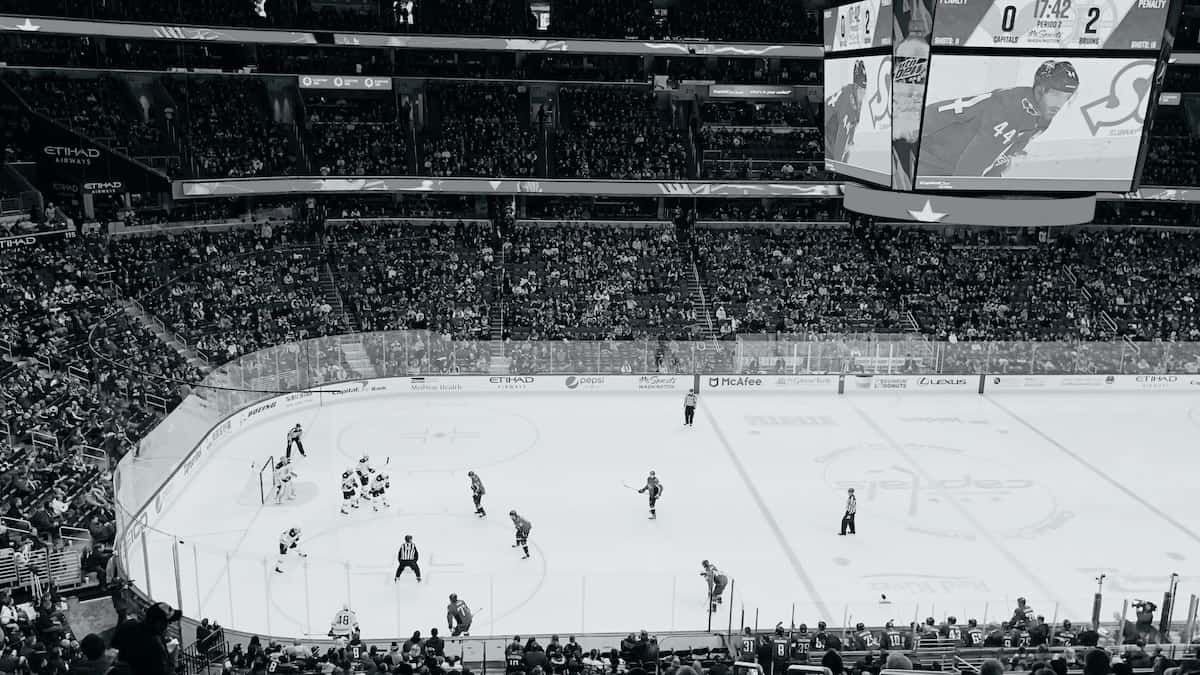 There are many questions that people have about hockey. How do you score a goal? What are offsides? And perhaps the most common question of all: How long does a game last?

In this post, we’ll take a look at the average length of a hockey game, what factors affect how long it’ll last, and answer some of the most commonly asked questions. Let’s get started.

This is a question that often gets asked by newcomers to the sport or those who are just curious.

While no two games are there same length, NHL games last for 60 minutes of regulation play made up of three periods, each lasting 20 minutes.

But, despite there only being 60 minutes of game time, in reality, hockey games last much longer.

But, if we had to give an answer for how long a hockey game last, the average time is probably around 2 hours and 20 minutes.

But that can be a lot longer, especially if the game goes to overtime and it’s the play offs!

Reasons for the Game Taking Longer to Complete

There are a number of things that can affect the length of a hockey game. Let’s take a look at some of the most common ones.

While it’s not included in the gameplay, the first and second periods are followed by an intermission. These last for between 15 and 18 minutes.

There are a few reasons for such a long intermission. The first is that it gives the players a chance to rest. Hockey is a physically demanding sport, and the players need a break every so often.

It also gives the ice crew time to clean up any debris that has accumulated on the surface during the period. The Zamboni will drive around the rink and resurface the ice, making it safer and more pleasant to play on.

Another reason for the intermissions is that it allows for more commercial breaks, which brings in much-needed revenue for the team and league.

Finally, it’s an opportunity for fans to head to the concession stands or take a bathroom break. Watching hockey can build up quite an appetite!

There are a number of stoppages in play that can affect the length of a game. These include:

While it might not seem like it, all of these stoppages add up and can make a game last longer than if they just let the clock carry on.

In the NHL, if the score is tied at the end of regulation time, the game will go into overtime. This is a 5-minute period where each team plays with 4 skaters instead of 5, and there is no intermission.

If neither team scores during this period, the game goes to a shootout. In a shootout, each team gets 3 shots on goal, and if the score is still tied after that, it goes to sudden death.

The overtime period can add quite a bit of time to a game, especially if it goes to a shootout.

If there is still no winner after overtime, the game goes to a shootout. This is when each team gets a chance to take 3 shots on goal. The team with the most goals after these shots wins the game.

If the score is still tied after each team has had three shots, it goes to a sudden-death shootout where each team takes alternate shots until one team scores.

As well as intermissions during each period, there are also three zones for commercials.

These ad breaks tend to last around 45 – 120 seconds and are every four minutes from the beginning of the period.

But there aren’t any commercial time-outs during overtime or a shootout.

How Long Between Regulation and Overtime?

If the game is drawn at the end of regulation play, teams won’t have a normal length intermission.

Instead, it will only last 1 minute before overtime starts. This gives them time to switch sides.

What is the Longest NHL Game Ever?

The longest NHL game ever played was in 1936 between the Detroit Red Wings and Montreal Maroons. It went for 176 minutes and 30 seconds of game time, almost 3 times the normal gameplay.

But, because there were so many stoppages in play, it actually lasted over six hours, and despite beginning at 8:30 pm, it didn’t finish until 2:25 in the morning!

How Long Do Other Hockey League Games Last?

Most, if not all other hockey leagues have a similar length of time to the NHL.

Below are some of the bigger leagues and how long their game time lasts.

But, there will be some differences between how long their intermissions are, whether they go to shootouts, etc.

How Long are College Hockey Games?

Just like in the NHL, college hockey games are 60 minutes long. However, there are still stoppages in play that can add time on, as well as overtime periods.

In the NCAA, if the score is tied at the end of regulation time, they will have a 20-minute overtime period. But, unlike the NHL, if no one scores during this time, college hockey games can end in a tie.

In conclusion, hockey games can last anywhere from 2 to 3.5 hours, depending on intermissions and overtime periods and whether it’s a playoff/cup game or not.

However, the average length of an NHL game is around 2 hours and 20 minutes.

So, if you’re going to watch a game live, come prepared with some snacks, and don’t plan anything immediately after, as you might be a little late!