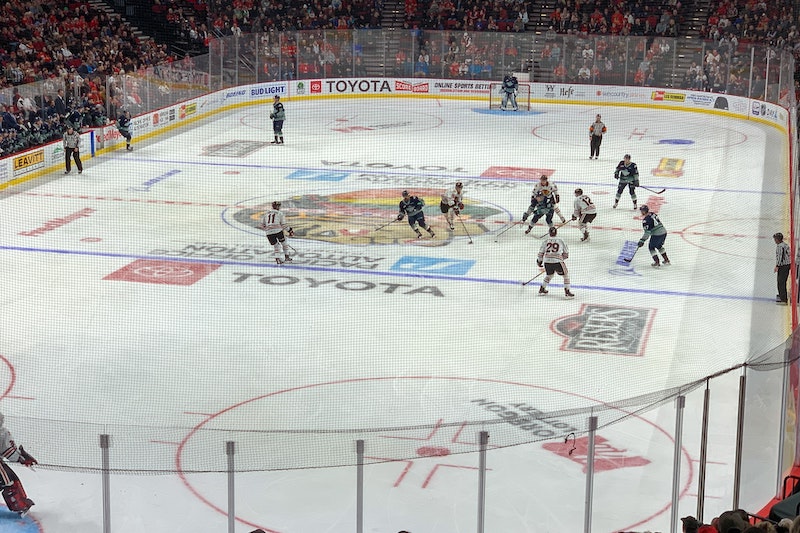 In order to get a basic understanding on how the clock works in ice hockey games, we should take a look at the way things are done at the professional ranks.

A regular season NHL game that does not end in a tie is broken down into three 20-minute periods. This is the basic standard for nearly all professional hockey teams worldwide, not just the NHL. It also applies to minor league affiliates of NHL clubs, major junior leagues such as the WHL, OHL and QJHL as well as most internationally sanctioned tournaments and NCAA college games.

While this is the basic format for professional games, there are quite a few variables you should be aware of.

If you’ve ever watched a professional hockey game, you’ll notice that the players leave the ice and head back to the locker rooms after the end of the first and second periods. This break is known as the intermission. It’s similar to the halftime of many sports, only it happens twice per game rather than once.

Intermission at the pro ranks are necessary for players to recover from the physicality of the sport and prepare for the next period, but that isn’t the only reason these intermissions exist.

Unlike other sports, hockey is played on a smooth ice surface that is greatly impacted by the blades of ice hockey skates. After 20 minutes of an NHL game, the ice surface can become difficult to skate on and affect the movement of the puck. During these intermissions, a specialized vehicle called a Zamboni lays a thin layer of water over the ice surface which freezes and provides a clean skating surface for the next period.

A typical NHL intermission lasts 17 minutes. This time varies greatly among the amateur and youth hockey ranks. Many lower level clubs and leagues treat intermissions as a timeout that last only a few minutes unless the ice surface is significantly damaged.

Timeout rules also vary from league to league, but generally most teams are only granted one two-minute timeout. You’ll also notice that televised games will have an extra timeout at the first stoppage after the sixth, tenth and fourteenth minute to account for advertising. The NHL still issues these timeouts even if the game is not being televised to give the coaches and players a consistent format.

Overtime is something that varies greatly from league to league. Many amateur and youth ice hockey leagues don’t incorporate an overtime making it possible for games to end in a tie. They’ll often change this rule for tournaments or championship games, but time keeping for OT in amateur ice hockey has no universal standard.

In the professional leagues, there is some variation in Europe and the United States concerning how OT is played. During the regular season in the NHL, the overtime period is only five minutes long, and teams can only use three skaters unless a penalty occurs. If the game is still tied after these five minutes, there is no further overtime. Players from each team line up for penalty shots in a process known as a shootout. Whichever team scores the best out of three tries will be declared the winner.

There are multiple overtime rules in European leagues. Some employ the five-minute OT schedule, some go directly to a shootout and others grant a tie if a winner has not been decided.

Overtime is handled much differently come playoff time since there must be a winner. In professional leagues in North America, overtime is considered a continuation of the game itself. If a playoff ice hockey game is still tied after the third period, the players take a third intermission and prepare for a fourth period of hockey. If no goal is scored in the fourth period, there will be yet another intermission and another 20-minute period will be played. As soon as a goal is scored, the game is over regardless of the time left on the clock.

Q: Why are there three periods rather than halves or quarters?

A: When professional ice hockey originated, games were played in 30-minute halves. The wear and tear on the ice made the surface hard to play on. Pucks would bounce funny and players wouldn’t be able to maneuver as well. In 1911 games were changed to incorporate three 20-minute periods to allow the ice to be resurfaced.

Q: What is the longest NHL hockey game ever played?

A: In the 1936 NHL playoffs, the Montreal Maroons and Detroit Redwings played 176 minutes and 30 seconds of hockey. The Maroons broke a scoreless tie in the sixth overtime period to take the win. In total, Montreal and Detroit played nearly nine periods of hockey, falling just four minutes short of going to a seventh overtime.

Q: Do all ice hockey games consist of 20-minute periods?

A: No. In fact, many youth hockey games are significantly shorter. Some amateur and junior hockey leagues vary the time of their games depending on how long they are allowed to use the ice. In some cases, there can be other games scheduled that day, so there are adjustments to the clock to accommodate.

Ice hockey is one of the greatest sports on Earth because it has rules and a format unlike any other, the clock is no exception. For a quick summation, most professional hockey games are: