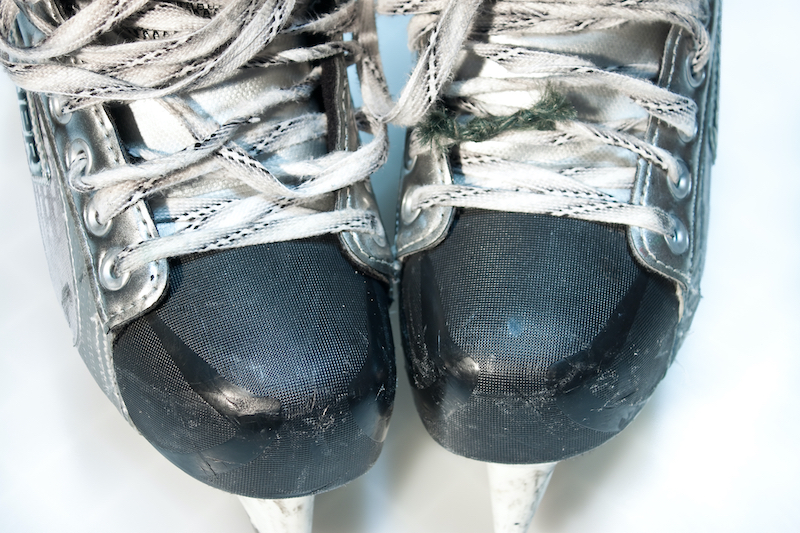 For the most part, the ice rink surface is pretty clean, so you may not notice too many visual signs of dirt or grime on your hockey skates, but that doesn’t mean that you shouldn’t take the time to clean them after every skate.

In this post we’re going to cover a list of steps that you can take to keep your skates clean and in the best condition possible.

Why You Need to Clean Hockey Skates

Even the best hockey skates for the money will get dirty. But, even if your skates aren’t visually dirty, it doesn’t mean they don’t need cleaning. There are two factors you should be aware of that could damage your skates and even cause health risks for your feet.

You may not see any grime or staining when your skate blades and boots get wet from ice that melts, but that doesn’t mean it has no affect. Moisture can damage the leather and other soft materials of the boot and can cause rust to form on the blade, metal parts of the runner and the eyelets for your laces. Weak leather can stretch causing a loose fit which will result in blisters. Rust deteriorates metal. This will cause harm to skate blades and cause eyelets and small screws used in construction to break.

Sweat can cause damage and health hazards on the inside of your skates. Although you might think it harmless, the sweat can actually lead to a number of issues such as:

The smell is the first thing you’ll notice if you don’t take good care of the inside of your hockey or figure skates. Sweat will build over time and bacteria will spread throughout your hockey skate boot. Not only does this increase the odor, the bacteria causes fungus and mildew to grow and damage the soft cloth and may cause athlete’s foot.

The damp surfaces will also rub sensitive areas of your feet increasing the chance of blisters. Bacteria from sweat can eventually break down the fabric that lines the skate boot causing damage that will reduce the life of the ice skate.

As we just mentioned, rust can cause extreme damage to your skate blades, but it’s also fairly easy to prevent.

Since moisture left on skate blades can cause rust, wiping them down with a cloth immediately after skating will help prevent moisture from remaining on the blades. Keeping a small dry towel in your hockey bag will remind you to always wipe down your skate blades. Make sure you change this cloth often, as it will retain moisture and won’t dry out properly if left in your bag for long periods.

It’s also important to wipe down the plastic runners as well. The metal parts used in their construction can rust and cause enough damage to present a safety hazard as their integrity deteriorates.

While you have your skate towel out, it may also be a good time to quickly dry the outside of your skate boot as well to prevent moisture from seeping into the leather and damaging lace eyelets.

Cleaning the Inside of Ice Hockey Skates

While taking care to remove moisture from the blades and outside surfaces of hockey skates is a quick task that can be taken care of immediately after coming off the ice, it does take a little more effort both at the rink and at home.

Another very important part to clean though is the inside of your skates which can often get overlooked and be a far more serious problem if left unchecked.

Let’s take a look at a few steps you can take:

Getting Rid Of Bad Smell

If you’ve been playing hockey for a while you’ll know all too well how bad your skates can smell after a while. But, just how exactly do you keep the insides of your skate clean and smelling fresh? Can you simply throw them in the wash with the rest of your hockey gear?

The answer is no. Washing your ice hockey skates in a washing machine will cause irreparable harm and should never be attempted. There are some simple things that you can do to help keep your skates odor free and prevent moisture from being trapped inside.

New Socks for Every Game

Wearing dirty or damp socks can make the sweat problem in skates worse. Wear clean socks at every skate. If you want to take extra-precautions, hockey equipment suppliers carry special moisture-wicking socks that greatly reduce the buildup of moisture and sweat in your skates. Something like these ones: 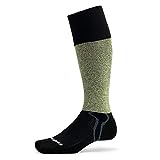 Air Out Your Skates and Insoles

After games or practice, it’s a good idea to air out your skates to help them dry out. Unlacing them, pulling out the tongue and removing any inserts with allow the airflow to help dry them out. Fungus, mildew and odor causing bacteria require dampness to multiply, so a dry ice hockey skate boot is a healthy ice hockey skate boot.

Many ice hockey pro-shops sell a deodorizing anti-bacterial spray. After you return home from an intense practice, you can use this spray while you air out your skates for extra prevention. You can also get deodorizer pods like these one here to pop in after a game to dry them out.

Another option is baking soda which is a natural deodorizer, so if you have a few days between games, or if you’ve forgotten to air out your skates over an extended period of time, you can sprinkle baking soda on the inside to help remove any odors.

Finally, some hockey players keep paper towels or old newspapers in their hockey gear bags to stuff into their ice hockey skates if they’re unable to air them out right away. Paper towels will absorb some of the moisture inside and prevent it from soaking into the cloth of the skate’s interior.

Ice hockey skates are an expensive investment and essential to success on the ice. Taking good care of them doesn’t take much time, so get into the habit of cleaning them, airing them out and deodorizing them after every practice.

We hope this article helped to give you some ideas of how to best take care of your skates and let us know if you have any other tips. If your skates are very badly and you’re wondering when to replace your hockey skates check out our guide here.