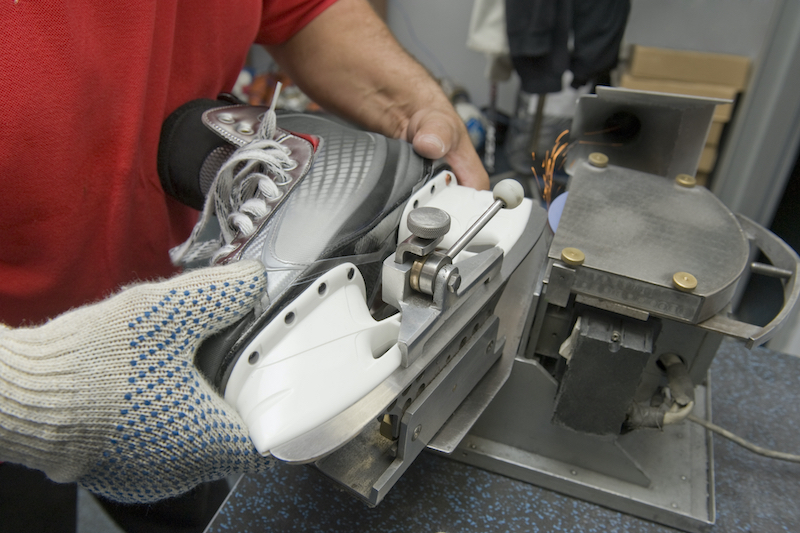 Whether you’re an experienced ice hockey player or are just starting to figure the game out, you’re probably aware that ice hockey skates require periodic sharpening. Dull skates reduce performance, prevent stopping and turning and could present a safety hazard on the ice due to slipping. While we know that hockey ice skates need to be sharpened, do we really know what happens when we drop our ice hockey skates off at the local pro-shop?

In this post, we’ll take a quick look at how the process works and what you need to know to get the best results possible when sharpening your ice hockey skates.

If you’ve taken skating lessons, you’ve probably had an instructor refer to using the “edges” of your skate. A close examination of the bottom of your skate blade will reveal that it isn’t one sharp surface that digs into the ice like a knife. Only the edges are sharp and there is a groove, called the hollow, between them.

These edges give you mobility on the ice, and putting pressure on the edges will cause them to gradually dull or flatten down until they are even with the hollow in places or along the entire edge. But, just because you’re losing a bit of your mobility doesn’t mean you need to replace your hockey skates.

Unless you’ve got a sharpening machine at home, you’ll have to rely on a professional to sharpen your ice hockey skates. In order to understand what to ask for when you get your skates sharpened, you should know a little bit about how the process works.

Skate sharpening machines hold the skate in place with a jig while the skate blade is run back and forth over a grinding wheel. This grinding wheel is what creates the hollow of the blade and sharpens both edges.

There are two types of grinding wheels involved in hockey skate sharpenings:

The cross-cut wheel is used to flatten the bottom surface of your ice hockey skate blade. This wheel is always used for the sharpening of brand new blades and can also be used to remove rust, create a flat surface on damaged blades or prepare skates for sharpening if one edge had dulled significantly compared to the other. A cross-cut may not be necessary every time you have your skates sharpened.

Finishing wheels come in different radii, and each radius offers a different depth. The larger the radius of a finishing wheel, the flatter the hollow will be. Let’s take a look at what this means when applied to the blade of your ice hockey skate.

What the “Cut” of an Ice Skate Sharpening Means

Have you ever been asked what “cut” you’d like when having your hockey skates sharpened? Simply put, the cut of your skate refers to the radius of the finishing wheel used during the sharpening process.

For a quick picture of how this works, think of a one inch radius being nearly flat while a radius closer to zero will be incredibly deep. If you have no preference most pro-shops will use a one-half inch radius by default. This is a fairly safe radius that many hockey players regularly use, but that doesn’t mean that it’s your only option. Let’s look at how the depth of radius affects performance.

A larger radius will offer less grip, or dig, on the ice. This can provide for higher speeds and more maneuverability for extremely skilled skaters. A lack of grip can make stopping difficult and cause you to slip or “lose an edge” on sustained tight turns. Larger radii such as three-quarters are only recommended for experienced skaters or heavier skaters who can apply enough pressure during turns to dig deeper into the ice.

Smaller radii offer better grip on the ice. While this can impact speed and reduce mobility on extremely tight turns, it will provide more grip on the ice and help maintain stability while maneuvering in traffic or quickly stopping and changing directions. Beginners or lightweight skaters get a smaller sized cut.

Most hockey skaters rarely stray too far from a neutral one-half inch cut. The most common cuts besides half-inch include five-eighths for a shallower hollow and three-eighths for a deeper hollow. Over time you’ll become more comfortable with your skating style to determine whether you should adjust one way or the other, just make sure you don’t make drastic changes or you may have issues when you step out on to the ice.

Just a quick note for goaltenders. Most goaltenders will use the shallowest cut possible, sometimes as shallow as a one-inch cut. The shallow cut provides less grip, giving them a better momentum when moving side to side.

From time to time you may hear the term “V-Cut” in reference to skate sharpening. The V-cut results in a flat hollow rather than a curved hollow. This cut has caught on in professional ranks, but has a few drawbacks for the amateur.

When an edge goes flat on a V-cut, it dulls quickly and usually takes out the entire edge. Rounded hollows tend to dull gradually and in sections. A dull edge on a V-cut blade could cost you the use of your skate until it’s been sharpened leaving you out of luck in the middle of practice or a game, while a blade with a standard hollow will typically retain enough grip to get you through your skate. The sudden loss of an entire edge of a V-cut could also lead to injury due to lack of grip. V-cut blades also require more frequent sharpenings which can be costly and reduce the lifespan of your skates.

Experienced ice hockey players may choose to profile their skates to fit their style and position. A forward may grind down the front portion of their blade to force their feel to lean forward slightly. This will create more dig in the front of the skate creating greater acceleration.

Profiling pretty much comes down to personal preference, so we’d recommend talking to experienced skaters and your pro-shop to evaluate whether it works for your skating style.

Can You Sharpen Ice Hockey Skates at Home?

It is possible to purchase your own shake sharpener and sharpen your skates at home. This is really only recommended for experts who sharpen skates often. Over time, the cost of a professional grade sharpening machine and replacement parts and wheels will never even out for the casual player, and inexperienced users could damage their skates and the machine if they’re not fully trained.

Cheaper home sharpening models that are fairly automatic are available. However, they also require replacement wheels and can be just as costly as a professional machine.

To finish, here’s a recap of some of the terminology and jargon used when talking about sharpening your skates.

We hope that helps make sense of how to sharpen your skates and gave you some knowledge of what you need to do. If in doubt, just pop to your local hockey store and chat to them. They’ll be more than happy to talk you how often to sharpen hockey skates and all the options.