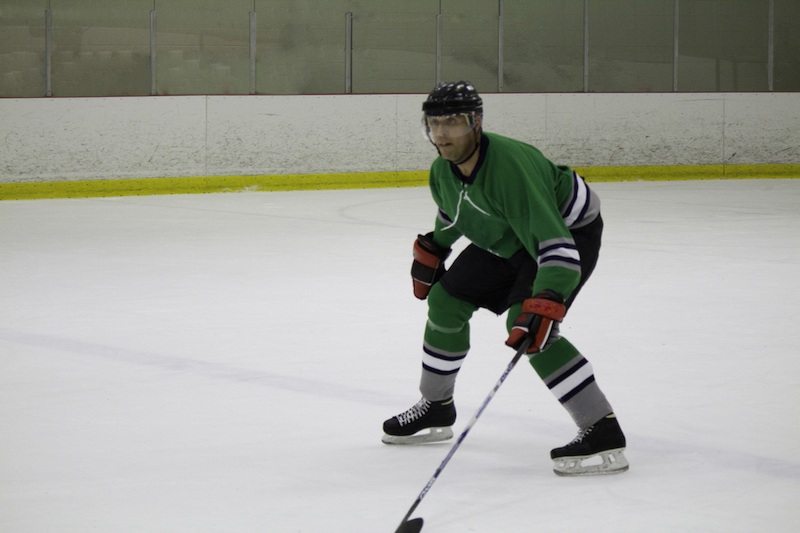 Becoming a proficient ice hockey skater requires some very specific skills. In order to master backwards skating, it’s important to know why you need to be proficient and how to begin to learn to master this complex skill.

In this post, we’ll cover some ideas and tips to help you improve your backwards skating.

Why Skating Backwards is Important for Ice Hockey Players

Proficient backward skating allows for defenders to keep the play in front of them so they can see the puck at all times.

If you only rely on forwards skating, there will be times that you lose track of the puck and the team on offense will end up with a major advantage.

Skating backwards in ice hockey does employ some similar skills as figure skating or casual ice skating, but there are also significant differences.

Casual ice skaters simply learn basic backward skating mechanics in order to move backwards without too much complexity and backwards figure skating is all about power and building momentum to perform aerials and jumps.

Ice hockey players, however, require more agility, mobility, and the ability to stop on a dime and change directions.

While the basics may appear to be the same, skating backwards requires a much more specific procedure. In order for proficiency, ice hockey players must remember:

Gaining proper posture is key to learning how to skate backwards. If you’re not maintaining the proper stance, the rest of the skills may be nearly impossible to master.

This form will probably be uncomfortable if you’re a beginner just learning how to skate, but once you master this posture, the rest will come much easier.

In order to skate like the pros, you’ll need to master the basics of hockey backwards skating first.

The best way to do this is to take some time at the local rink to get used to the experience and momentum of moving backwards.

Remaining upright while skating backwards is quite a different experience than keeping your balance skating forwards.

The best way to start learning to skate backwards is by standing facing the boards in the proper backwards skating position and simply pushing off.

Don’t worry about taking strides, just try and remain in the correct form while gliding backwards. After you’ve done this a few times, it’s time to add an S-stride after you have pushed off.

It’s much easier to get the hang of an S-stride if you already have some momentum going, so begin facing the boards once more and push off.

Soon after pushing off, point your toes towards an imaginary point a foot or two ahead of you and your skates will begin to extend outwards. This will begin to carve the top half of an S into the ice.

Once your skates have extended out, angle your toes outwards and use the muscles in your inner legs to pull them back in.

This will take a lot or work and practice as it’s not a muscle group you’ll likely be used to using.

Don’t be discouraged if you can’t complete the S-stride in your first few attempts. It will take time.

Remember, use the momentum you’ve gained from pushing off of the wall to aid your attempt at pulling your skates back in after they’ve extended through the first half of the stride.

Once you have begun moving backwards, continue the process over and over until you’ve been able to skate a significant distance in reverse.

Here are some tips to remember:

Once you’ve learned the basics of backwards hockey skating, you’ll need to push yourself to master some of the more difficult techniques. Just knowing how to move backwards is only half of the battle.

Ice hockey players who are proficient in backward skating will always have a better opportunity to be in the right position and have a better on-ice experience.

While the S-stride will keep you moving in the right direction, it’s not the most powerful backwards skating technique.

The C-cut motion is very similar to the motion for the S-stride, except it’s a little bit wider and you only push and pull with one skate at a time.

You can practice C-cuts the same way you learned the S-stride by pushing off of the wall or striding backwards using the S-stride to gain momentum before switching to a C-cut.

C-cuts are also often used to gain power when beginning to skate backwards from a standstill and turn quickly while skating backwards.

Tips for How to Practice Backwards Ice Hockey Skating

The best way to get better at backwards skating is to practice often.

The first key is to practice your form until you no longer have to think about it. This can be done at the rink or even at home.

Take the time to set your posture in the proper position whenever you get the chance. Eventually, muscle memory will take over, and it will be an unconscious habit.

Secondly, don’t give up. Backwards skating is hard to learn and just as hard to master once you’ve been taught the fundamentals.

Finally, get a friend or teammate to videotape your stride. Watch the video after your practice session and compare it to the steps outlined in this article. This will shed some light on where you may need improvement.