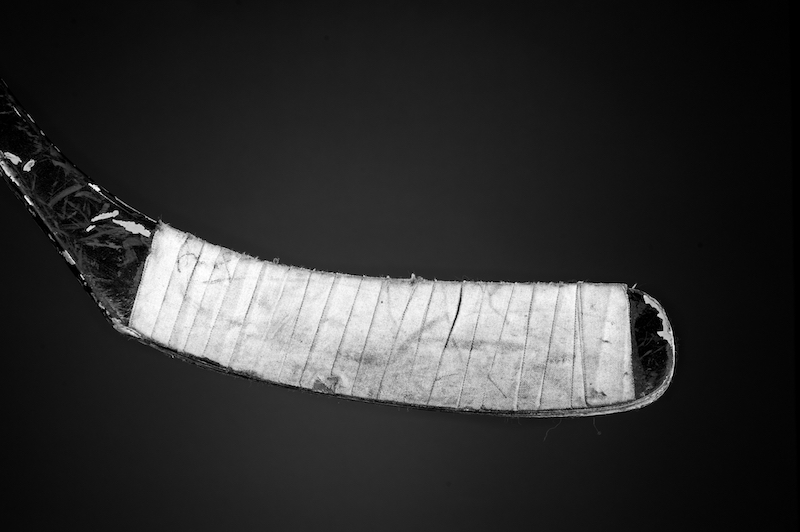 Why tape your stick

There are novices among us, who aren’t very knowledgeable about ice hockey. I’m sure most of you in that group of people are wondering why ice hockey players tape their sticks. There are several reasons why one would want to do it. As with most equipment we use we tend to get attached to it and prefer it to the rest. The same applies to those players. They tape their sticks to protect them from wear and tear. A taped bar will look good for longer as the wear that it would otherwise experience is received by the tape.

Some of the tape you find on a hockey stick is intended to change the feel of the stick which will, in turn, have an impact on the handling of the stick by the player. Some might feel that the stick is slippery, so putting a tape on it will add grip and increase their confidence during play. In this case, the player often creates a knob at the end of the shaft. This knob is the one which prevents the stick from slipping out of hand and becomes a reference point when the stick is dropped, and there is a need to pick it up quickly.

The other reason players tape their sticks is to increase control and interaction between the stick and the puck. This is mostly done by adding more tape to the shaft, which has an effect of making it easier to control the puck as it improves the contact between the puck and the blade. The connection achieved by the taped surface also makes it easier to put more spin on the puck, which can make a difference between scoring and landing the puck in the goalie’s glove.

These are all the performance reasons why you will want to tape your stick as a hockey player, but there are other reasons hockey players tape their sticks. Mostly these are not mentioned because they are not reason enough to stand on their own. Some players nowadays tape their sticks to make them look useful and attractive with a variety of coloured tapes.

Besides, some players add a coat of wax or mink oil to the stick after tapping, the wax layer protects the stick against ice build-up and adds friction between blade and puck.

Types of tape to use

For variety and style hockey tape comes in a variety of colours and types. The types have different qualities and thicknesses. It is made of cloth which is versatile to be used on any part. The most common widths are 1 inch and 1.5 inches.

In the past, there was only one type of tape used on hockey sticks which is an electrical insulating tape which is not difficult to come across. Today there are a variety of taping options, but the most common choice for grip is a surgical tape which players apply on the knob to add extra grip and prolong the life of their gloves. This type of tape has a soft and spongy feel.

Another not so popular tape is very sticky friction tape, it is used on the blade or the grip of the stick. If the player is looking for sticky handling, this is the tape to use.

In the modern world, there have been rubber grips which are a replica of grip tape. They do not only look like tape but feel like it too. Different brands are producing these runner grips, all with varying styles of grip. The advantage of using this rubber in place of actual tape is that it saves you the time you would use to tape the stick now and again.

The other tape used in hockey is polyurethane; this type of tape is not operated by most on the stick but is very popularly used as shin tape. It is used on shin pads and socks to help keep them in position. The tape is pressure sensitive and elastic, which reduces the risk of cutting off circulation to the legs. This tape is single-use, so it is discarded after use, but it comes in a variety of colours allowing the player to choose the colour that best matches their kit.

Other players use duct tape for their knob, but this defeats the whole purpose of applying tape in the first place because duct tape is very slippery and for this reason, we strongly advise players not to use duct tape.

Some manufactures produce types of tape specific for hockey sticks. This reduces the hustle when looking for which tape to get. Howies is one of those companies which have ventured into the business of producing tape for hockey sticks. Their popular tape is the cloth non-stretch tape. Renfrew also makes a tape for hockey sticks. This brand is the go-to if you want a splash of colour on your stick, they have a lot of different shade colours to widen the choice of their customers. Lizard Skins also produces the tape. Their tape is made from Dura soft Polymer which is best suited for the handle. Their tapes also include patterns on top of the assorted colours they already have. If durability is the best of your interests then you need a product from Sports Tape, their tape is made from a tightly woven poly-cotton fabric which lasts longer than most.

What you will need to tape

Before you think about taping your stick, you should have on your rolls of tape along with a pair of scissors to cut the tape with, if you have both of these then get your stick and get ready to start taping.

You will probably spend a lot of time taping a hockey stick on your first trial but once you get used to it 30 minutes should be enough to tape your hockey stick thoroughly. Before you begin tapping you should plan and determine how long you want the handle of your stick to be taped and how much you want the blade to be tapped. It is advised that the handle of the stick is tapped in a non-coloured tape, preferably white, bold colours are usually avoided because the paint would rub off to the gloves when you play. Most players tape their blade in white but the better colour to tap the blade is black, this is because the black colour does a great job in hiding the puck from the opponent, black tape is also more durable and shows less wear than light coloured tape.

Step 1: Taping the butt end of the hockey stick

First unroll about 75 centimetres of white tape, before cutting it from the roll spin it to make the unrolled tape twist onto itself. After twisting it onto itself make sure it does not come undone, cut it from the roll, leaving an allowance to attach it to the top edge of the hockey stick. With this tape make three complete revolutions of the hockey stick which areas, even as best they can, do not cut this piece after completing the revolutions. The number of revolutions depends on the desired size of the handle so if one wishes it to be longer. They can make more than three revolutions.

After the three revolutions start tapping the grip of the handle, with the rolled piece of tape on the handle make a 45-degree angle to the top on the stick, keep it at 45 degrees and make one more revolution around the stick. With the rolled tape make more evenly spaced revolutions on the stick until you reach a length of between 5 and 6 inches. Now you can cut the twisted piece of tape if there is still more of it left. Next place tape from the roll on the end of the stick and unroll it to a length of eight inches and cut it at that eight-inch mark. Press this tape firmly on the side of the stick, repeat this procedure to cover the sides of the stick that can still be seen, and the top of the butt end can no longer be seen.

Next, you have to tape the handle, make sure to start very close to the top and carefully unroll the tape while taping the stick in equal revolutions. Continue with these revolutions down the shaft of the hockey stick until the grips are thoroughly covered, cut the tape when sure that the tape is parallel to the floor.

Remember, black tape is a better choice than white for the blade. Cut a six-inch piece of tape and place it lengthwise on the bottom of the blade. Press the sides of the tape from the heel of the blade to the toe. Next, unroll the tape and attach its starting end to the end of the tape on the heel of the stick. Repeat the first revolution around the blade then continue making revolutions towards the end of the heel, making sure your revolutions are even, and the blade can’t be seen. Make sure to leave about an inch untapped at the toe. After all, this is done to cut the tape and firmly press its end to the blade.

How to remove the tape

Some people leave their sticks to lose the tape. Naturally, this process is very long and tiring not to mention how inefficient it is. There are a couple of ways to remove the tape from your hockey stick. The easiest and obvious one is peeling the tape off. But this also has a disadvantage of leaving the sticky adhesive of the tape on the stick.

The cheapest yet very efficient way to remove the tape is using hot water, the heat from that water softens the polymer glue of the tape which can then be easily peeled off leaving a clean surface. If you don’t have water at your disposal, use the other straightforward yet efficient option of using a blow dryer. The dryer blows hot air which will then dampen the polymer glue allowing the tape to be peeled off with ease.

Another great way to get that sticky goo left after peeling off tape is using nail varnish remover, but the downside to this method is that the vanish can damage some materials used in coating your stick. A safe way to remove that goo is using an eraser to rub it off.

There are different sticks for playing hockey; these fall into three main categories. The categories include wooden hockey sticks, one-piece composite sticks and two-piece shaft combos. The oldest and classic sticks are made of wood; these have a classic feel that provides a consistent feel for the puck. The only disadvantage is the very low durability of this type of stick. The stick needs heavy taping from the box as this will slightly add to its life. For this type of stick, you will also need a more vital kind of tape.

Composite hockey sticks are the most common in today’s age as they have grown to become more affordable than they were a while ago. The composite sticks are mostly made from carbon and fibreglass materials; the lightweight of these materials allows the hockey player to perform better. These though stronger than wooden sticks also need to be taped, as stated above taping the stick keeps looking newer for longer.

The blade combo sticks were once very popular but aren’t so popular today. These consist of a removable blade which was designed to allow the blade to be changed if it happens to get damaged. These types of sticks need to be tapped as well, but you shouldn’t tape where the two pieces connect.