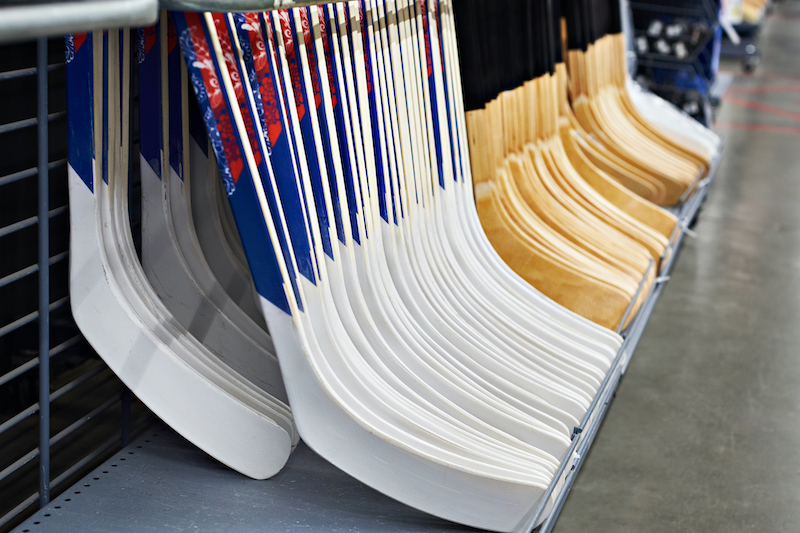 Let’s take a close look at each part of the modern ice hockey stick.

The Anatomy of an Ice Hockey Stick

Many players also fashion some sort of knob at the end of their stick to prevent their top hand from sliding off completely. This can be achieved with standard hockey stick tape or an insert that is adhered to the hollow top of the stick. Many amateur and youth leagues require this knob to prevent the butt end of the stick from sliding through a players face mask and causing injury.

An end plug is often inserted into the butt end of a hockey stick to increase its length. There may be times when a player desires a stick that is in between commonly manufactured lengths, and they’ll extend their stick by inserting an end plug extension.

The shaft of the hockey stick includes the butt end of the stick and runs all the way down to the blade. Shafts are available in both a grip and clear finish that provide either a sticky grip or reduced friction when stick handling.

Shafts may appear to be simple and have few customizable options, but that is far from the case. When assessing a hockey stick shaft, it’s important to take into account a few factors.

If you watch hockey players shoot, you’ll notice that their stick will bend during the most shots. This is known as the flex. The smaller the flex rating is on a hockey stick, the less strength it will take to bend or flex the stick. The most common calculation for appropriate flex is to take a player’s weight and divide it in half. Using a stick with a much too low of a flex can lead to broken sticks and a stick with a high flex value will make shooting more difficult for lighter players.

The blade of an ice hockey stick comes in many different styles to fit numerous styles of play. The blade consists of three parts; the heel, the face and the toe. The heel connects to the shaft, the face is the flat surface of the blade and the toe is the rounded end of the hockey stick blade.

While every blade has these three parts, not every blade is shaped the same. Different styles of play require different blade shapes. Defensemen usually like a flatter blade, while forwards prefer more curvature. Most hockey stick manufacturers produce blades in several different styles to provide something for everyone. Here are some factors to consider when choosing a stick blade:

The lie of the blade represents the angle of the blade in relation to the shaft. The lie changes how flat the blade will be on the ice. Taller players may wish to use a lower lie to keep the blade flat on the ice when the stick is outstretched. Higher lies are better for shorter players and forwards who stick handle close to their bodies.

A blade’s curve depth is exactly what it sounds like, it’s the curvature of the blade face from heel to toe.

The face angle of the blade refers to whether the blade is considered open or closed. An open face angles towards the backside of the blade when viewed from above allowing for more lift on shots. A closed blade face will be more vertical for better stickhandling and helping beginners learn basic stick skills.

Finally, most ice hockey stick manufacturers have created patterns which take the lie, curve depth and face angle into account to incorporate a specific style of play. Many of these patterns are named after professional players to give consumers an idea as to what pattern fits specific hockey styles.

Butt: The top of the stick handle

Shaft: The long part of the stick above the blade

Blade: The part of the stick used for stickhandling and shooting

Heel: Where the blade meets the shaft

Toe: The end of the blade