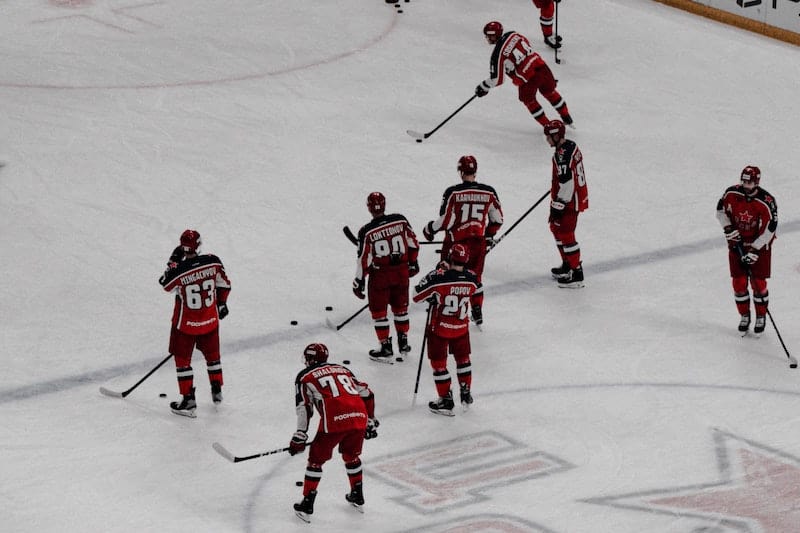 Ice hockey has some unique rules that may confuse newcomers to the sport. Every once in a while, an ice hockey novice will hear a whistle, see a stoppage in play, and have no idea what’s going on.

Icing is one hockey rule that has no relevance in other sports, so those who are just being indoctrinated into the sport may be confused at first. Let’s break down exactly what icing is and when it occurs.

The Definition of Icing

To break the icing rule down precisely, you’ll need to understand the lines on the ice hockey rink surface.

If you were to look at a standard ice hockey rink from above, you’ll notice five painted lines on the ice.

Running from one end of the hockey rink to the other, these lines are:

You’ll notice that the names of the lines repeat for each half of the ice.

The goal line and the center-ice line are the most important markers when it comes to assessing whether or not icing has occurred.

Icing occurs on any play where the puck is shot or passed before it reaches the centerline and is sent beyond the opposing team’s goal line without being touched by another player.

With only a few exceptions, sending the puck all the way down the ice from anywhere in the defensive half of the ice hockey rink before you have reached the center line will result in an icing call.

Once icing is called, the puck is returned to the offending team’s defensive zone for a faceoff.

The consequences can be more severe in professional ranks, as the offending team will not be allowed any substitutions after an icing call.

For player safety, youth hockey teams are allowed to change after icing calls, and many other amateurs also permit a line change rather than force tired players to remain in the game.

All icing calls are initiated when the puck is shot or passed before the centerline, but there are three variations that control whether or not an official blows the whistle and makes the call:

With the touch icing rule, icing is not called unless an opposing skater touches the puck after it has crossed to the goal line to force the icing rule.

If the touch rule is in place, a defending player can potentially clear the puck from behind the center line and avoid icing if his teammate beats the opposition to the puck.

The no-touch or automatic icing rule states that icing will be called the second it crosses the goal line, regardless of whether or not any player can touch the puck.

Finally, hybrid icing is left up to the discretion of the officials on the ice. If a linesman feels that there is no chance for a player on the team that has iced the puck to reach it before his opponent, he can blow the play dead once the puck crosses the goal line.

If he sees that the icing team has a clear advantage to reach the puck first, he can wave off the icing call and allow play to continue.

Exceptions to the Icing Rule

There are two major exceptions to the icing rule in most professional leagues.

The first exception is if the puck enters the net for a goal, passes through the goaltender’s crease, or is touched by the goalie himself. In this scenario, icing is universally waved off at any level of play.

The second exception occurs when the defending team is shorthanded. If your team has a man in the penalty box, you can clear the puck all the way down the ice without incurring a whistle for icing.

While this is generally accepted at the professional level of ice hockey, this exception varies in the amateur and youth ice hockey ranks.

Why Does Icing Exist?

There are a few reasons why the icing rule has been put into place:

Without an icing rule in effect, any team could simply slow down the game if they were tired, needed a line change, or were under too much pressure in their zone.

Without any consequences for icing, the game of ice hockey would have a strategically slow pace as defending teams would simply send the puck down the ice every time they gained possession in their own zone.

Imagine if a team had a two-goal lead in the third period, they’d simply be able to run down the clock by constantly sending the puck the length of the ice whenever there was a turnover.

The Game that Inspired the Icing Rule

While there are multiple reasons icing was introduced into the ice hockey rule book, an NHL game in 1931 most likely lead to a serious discussion to officially change the rules of the game to incorporate the icing rule.

On November 18th, 1931, the New York Americans took a three-to-two lead into the third period against the Boston Bruins.

During this third period, the Americans iced the puck over 50 times without consequence in an effort to protect their lead.

The loyal Boston home crowd became so angry at this tactic that they littered the ice with debris and the game had to be delayed.

The next time these two teams met, the puck was iced 87 times in a game that ended in a scoreless tie. By 1937, the NHL had adopted an icing rule to prevent this scenario.