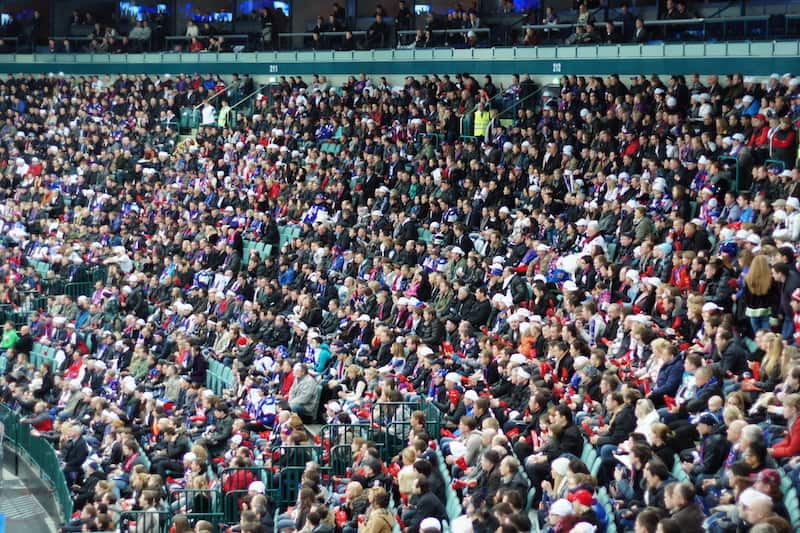 It can be difficult to know what to wear to a hockey game, especially if it’s your first time! On the one hand, you want to dress in a way that shows your support for the team; on the other hand, you don’t want to embarrass yourself or get too cold. What’s a fan to do?

Well, the first thing to know is that ice hockey arenas get fairly cold. They’ll usually run anywhere between 50-65°F, so you don’t want to be showing too much skin.

In this post, we’ll walk you through some of the dos and don’ts of what to wear at a hockey game. Let’s get started.

What to Wear to a Hockey Game?

Wearing the right attire to a hockey game can make all the difference in your experience. There’s nothing worse than being too cold or too hot.

If you only take one thing from this article, it’s that you should wear layers to a hockey game.

The temperature in the arena is usually around 60-65°F, which can feel chilly if you’re not used to it. Wearing multiple layers will allow you to adjust to the temperature and stay comfortable throughout the game.

Another thing to consider is where the rink you’re going to is located. If it’s outdoors, you’ll definitely want to dress warmer than if it were indoors.

If you’re in the depth of Canada in a local college rink, it’s not going to be as well-insulated as an NHL arena game, so dress warmer for that, too.

Footwear-wise, don’t show up in a pair of flip-flops. You want to wear something that will keep your feet warm and dry, like sneakers or boots.

You want to be comfortable as you’re going to be sitting (or standing) for a long time, so something with good support. That means no bad shoes that are going to kill your feet.

And finally, show your support for the team by wearing their colors! What’s the point of going to a game if you’re not going to show who you’re rooting for?

If you’re new to hockey, or don’t have a team that you’re particularly loyal to, find out who the home team is and wear their colors. You can usually find jerseys, t-shirts, and hats at the arena or at sports stores.

What not to Wear to a Hockey Game?

Let’s face it, most of us have been to a sporting event or two in our lives where we’ve seen someone wearing something that just makes us cringe.

You know, like those people who wear their team’s jersey head-to-toe or those who show up to a baseball game in a football jersey.

It’s just a big no-no. So, if you’re thinking about going to an ice hockey game, there are a few things you should avoid wearing if you don’t want to stand out like a sore thumb.

First and foremost, don’t show up in shorts or a skirt. It might be tempting to dress for the warm weather outside, but trust me, you’ll regret it when you’re freezing cold inside the arena.

The same goes for tank tops. You might think you’ll be fine because you’re layering, but arenas tend to be quite drafty, so your bare skin will feel the chill.

Another thing to avoid is anything that is going to be a distraction to other fans or players. That means no bright colors or patterns that will stand out too much.

You also want to avoid anything that is too loose or flowing, like long dresses or skirts. You don’t want to be the person whose clothing gets caught on something and causes a delay in play!

Lastly, leave the flip-flops at home. I know it’s tempting to wear them because they’re easy to slip on and off, but walking around an arena in them is just asking for trouble. You want to be comfortable, but you also want to be practical.

Wearing the wrong shoes can also be a safety hazard. You don’t want to be slipping and sliding all over the place, especially if you’re in the upper levels where the floors can be a bit more slippery.

Also, hockey areas are a family-friendly environment, so you don’t want to wear anything that’s too revealing or offensive. Stick to clothing that you would feel comfortable wearing around young children.

How Cold Is It in Ice Hockey Arenas

If you’re new to ice hockey, you may be wondering how cold it gets in the arena. The short answer is: it depends.

All arenas are kept at a cool temperature to keep the ice from melting, but it can vary.

The average indoor ice hockey arena is kept between 50-65°F, but if you’re attending an outdoor game, it could be even colder!

Be sure to dress warmly and in layers so you can adjust to the temperature inside the arena.

What Else Should You Bring to a Hockey Game

Whether you’re a seasoned veteran when it comes to attending live sporting events or you’re just looking to up your game and show your support in style, here are some other things you could bring along to watch the hockey.

First and foremost, you’ll want to make sure you’re wearing a jersey of your favorite team or player.

Not only is this a great way to show your support, but it’s also a fun way to get into the spirit of the game. If you don’t have a jersey, don’t worry – a simple t-shirt or sweatshirt in your team’s colors will do the trick.

A foam finger is always a good choice, or you could opt for a set of team-themed noisemakers.

You’ll also want to grab a hot drink to keep you warm and a snack to keep you energy levels up. Hockey games can last quite a long time, especially in the playoffs!

No matter what you choose, make sure you have fun with it and show your support for your favorite team!

How Long Do Hockey Games Last?

The average hockey game lasts around 2.5-3 hours but can sometimes go longer depending on things like overtime and penalties.

If you’re attending a playoff game, be prepared for a longer game – they tend to be more intense and can last up to 4 hours.

What Time Should You Get to a Hockey Game?

It’s always a good idea to arrive early to your seats so you can watch the warm-ups and get a feel for the energy in the arena.

Doors usually open around 1 hour before game time, but most fans will arrive around 30 minutes before the game begins. This will allow you time to find your seats, settle in and grab some snacks before the action starts.

As you can see, there are a few things to keep in mind when choosing what to wear to an ice hockey game. We hope you found it helpful.

Just remember to dress comfortably, in layers, and in your team’s colors or gear and you’ll be fine

Most importantly, have fun and enjoy the game!