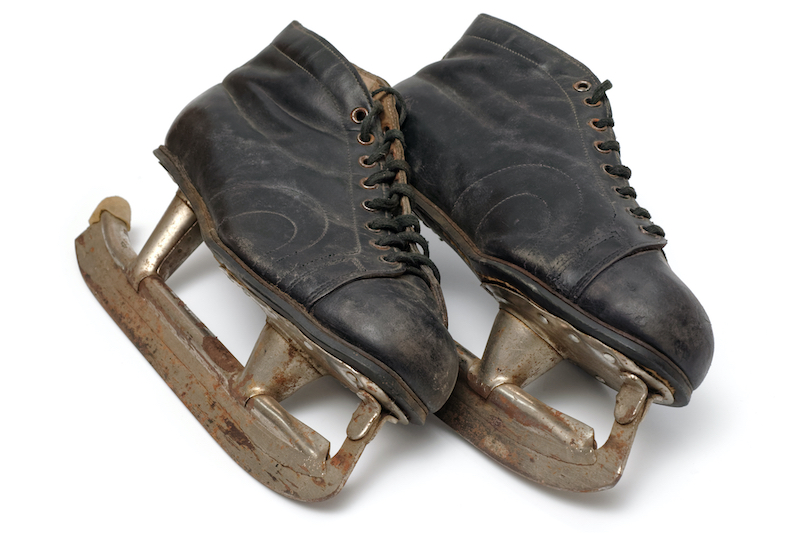 The game of ice hockey is tough on equipment, and over time certain pieces will wear out and need to be replaced. While some equipment can put up with more wear and tear than others, skating on a worn out pair of ice hockey skates can seriously hamper performance and create a safety hazard if they’re in poor condition.

In this post, we’re going to dive into some tips on knowing when it’s time to let the old pair go and purchase some new skates for hockey.

How can you tell if it’s time to retire your current skates and buy new ones? Here’s some key elements to check:

Let’s break down each of these elements individually so you can better assess whether it’s time to buy a new pair.

The boot of your skate should be stiff and supportive. If it’s not, you won’t be able to get the best performance on the ice, and you can risk injury to your ankles due to an overly loose fit.

Over time, the leather of the skate boot will stretch. Some places will stretch more than others, so be aware of a few signs of stretching in the following areas:

If the top of the ankles feels looser than normal and your ankle rocks side to side much more than normal, it may be a sign of stretching. Many hockey players play with a looser ankle, but you should be able to tell the difference between the way it normally feels and a state of being much too flexible.

The heel is supposed to lock into the back end of the skate and sit fairly firmly. If this section of the skate begins to stretch, you’ll find your heel popping out of place, many times more to one side than the other. This is another sign that the leather in the skate boot has stretched.

Finally, the sidewalls of the hockey boot are prone to stretching due to the pressure put on them during turns and stopping. If the sidewalls of your hockey skate boot are overly stretched, you may feel the one side of the bottom of your foot lift off of the insole when turning.

If you’re not experiencing any of these specific problems but just feel an overall sense of looseness, it may be time for new laces rather than brand new hockey skates. Skate laces wear out over time and will eventually fray to the point where they’re no longer are capable of holding tension when you skate. Before replacing your skates due to them feeling looser than normal, try simply replacing the laces first. New laces are far more cost-effective that brand new ice hockey skates.

Examining the physical structure of the skate boot can give you added insight into whether or not you require a new set of hockey skates.

If hard surfaces breaking through the soft padding on the interior are rubbing your skin raw or you feel poking from screws, wires or other fastening materials on the inside of the boot, you’ll probably want to look for a new set of skates sooner rather than later. These sensations will go beyond uncomfortable to painful real fast if not addressed.

Physical pain won’t be the only sign that your skate boot is breaking down. If you have an older pair of skates a visual inspection can help you determine your boot’s condition.

Look for loose threads, tears, folding of the ankle guard and rust on the eyelets. If your skates are visibly damaged, chances are the structural integrity has been compromised. Be aware, that scuffs and scrapes are normal over the life of an ice hockey skate. We’re referring to what appears to be actual damage.

While the boot takes a lot of wear and tear, there are some times that the blade wears out or is damaged to the point it’s unskateable.

Skate blades will naturally nick and become dull, and most times even larger nicks can be sharpened out at the local pro-shop or at home. Here’s our guide on how to sharpen hockey skates if you want to give it a go. However, if you notice something beyond a nick, such as a large dent or crack, the blade can be dangerous to skate on. If the cracks or dents are big enough, putting too much pressure on it can cause it to break.

Each time you sharpen your skates, the blade becomes a little bit smaller. Over time, you may reach the point where the blade cannot be sharpened anymore due to its lack of depth. At this point, your skate probably should be replaced.

Some skates do have replaceable blades, so if your boot and runners are still in good condition, there’s hope of a blade replacement rather than replacing the entire skate. If you’re unsure about whether damage to your ice skate blades are serious or not, your skate expert at the local skate shop or hockey equipment store should be able to inspect it and let you know.

Damage to the Runners or Blade Holders

The final aspect to check out is the runners and blade holders. These are the plastic parts that connect the blades to the boot. Checking for cracks and damage is a priority, and significant damage can be a serious hazard.

You’ll also want to examine the connection between the runner and the boot. If some of the screws are missing or loose, you’ve probably put enough time in on your skates where you should consider shopping for new ones. Sometimes these small screws can be replaced, but more often than not it’s a sign that your skates are becoming overly worn.

Just like the rest of the skate, small chips, nicks, scrapes and scuffs can be considered normal wear and tear, but any structural damage should be taken seriously.

If you’ve noticed stretching in the skate boot or damage to the blades and runners, you should consider purchasing new skates. If you’re only experience a small amount or stretching in the boot, it may not be an immediate issue, but remember, some skates take some time to break in, so purchasing a new pair of skates while your old ones still have some life left in them may be a good idea.

Another thing to mention is that it’s important to clean your hockey skates after every skating session. Getting the moisture off will ensure they last for longer and prevent rust and lots of other damage to the skates.